Hydrogen analysis of fluid inclusions by mass spectrometry is inadvisable.

Reported results in the literature are probably incorrect and should be treated as highly suspicious!

But these studies have ignored the potential for generation of hydrogen within the ionizer of the mass spectrometer.

Everyone has become so familiar with quadrupole mass spectrometers as an analytical tool that they have failed to understand the chemical changes that occur within the ionizer in common use, the electron impact ionizer. The electron impact ionizer is essentially a particle accelerator which breaks up molecules. Water, hydrocarbons and hydrogen sulphide are broken up in the ionizer, with hydrogen being a byproduct!  The monatomic H formed is converted to diatomic H2 by side effects within the ionizer. There is a serious risk that any measured hydrogen is merely an artifact of the analytical method and does not reflect the hydrogen content in the sample at all. We should NOT accept results for hydrogen analyses by mass spectrometry without a very thorough consideration of and correction for the hydrogen generated in the ionizer!

Consequently, the preferred method to analyse for hydrogen in fluid inclusions should be by Laser Raman microprobe.

No-one seems to have properly considered the chemical changes that happen in the ionizer of mass spectrometers. This ionization process generates hydrogen from water as a byproduct (and also from other hydrogenous molecules) and this serious oversight needs to be addressed.

Skip to the conclusions

A simple description of a mass spectrometer is here.

In the analysis of low molecular weight fluids, as found in fluid inclusions, the ionization required for mass spectrometry almost invariably uses the common electron impact ionizer, usually run at a voltage of 70-100 volts. The electron stream of 100 ev electrons impacts the gaseous molecules, knocking off electrons to generate the positive ions required by the mass spectrometer. But this often fragments the parent molecules as molecular bond strengths are much less than 70 ev, typically only 5 to 10 ev. So the result of ionization is a mixture of positively charged molecules and numerous molecular fragments, which may or may not be charged. This fragmentation is well known of course and is documented in the commonly used NIST tables which are used in mass spectrometry analysis. However, these tables do not show molecular fragments with a mass/charge (m/z) of less than about 15. But just because hydrogen with m/z of 1 or 2 is not shown in these tables is no excuse to ignore the fact that it is generated in the ionizer!

The problem is the presence of water and other hydrogenous species, particularly hydrocarbons. During ionization, these can all fragment giving rise to hydrogen. Although this has a mass of 1 and may be uncharged, changes can occur leading to H2+ ions with m/z = 2, which is then wrongly assumed to have come from hydrogen in the original sample. It is not entirely clear how H* transforms into H2+ , but it most certainly does!  ( I use the superscript  *  to indicate an uncharged free atom.) A possible mechanism for the generation of H2+ is here.

There is no doubt whatsoever that abundant hydrogen is generated in the ionizer from the parent water molecules.
However, these are single atoms with a mass of only 1, rather than molecules of mass 2 which is used to indicate the presence of H2.
But what happens to all these hydrogen atoms? They are neutral and so they are not attracted to the electrodes and removed. They are only removed by the vacuum system. This may not remove them efficiently, depending on the instrument configuration, and they may interact and form H2 molecules, which could then be ionized, measured and wrongly assumed to represent hydrogen in the parent sample. 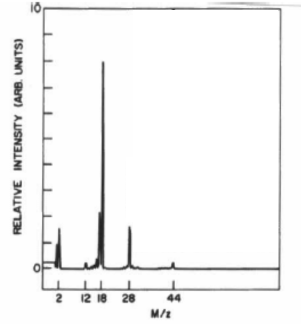 This mass quadrupole spectrogram of air, with water, is from "A user's guide to vacuum technology", Wiley 1989 by John F. O'Hanlon.


Other analyses of water show a less intense 2[H2]+  peak, but water always does give some H2 when ionized in the electron impact ionizer. Tables of fragmentation are available which show that the proportion of H2 is dependent on the ionizer voltage, with higher quantities at lower voltages.

But you clearly must not assume that when measuring an aqueous fluid, that the hydrogen you measure in a mass spectrometer is solely due to hydrogen in the source sample fluid.

I have ignored the effect of deuterium of mass 2 in this discussion, because its abundance is quite low in normal water (only one atom in 6420, or 156 ppm numerical abundance). Although this would also contribute to the peak at mass 2, its abundance is far too small to explain the hydrogen results claimed in too many fluid inclusion analyses.

How fluid inclusion gases are analysed in the mass spectrometer

To use mass spectrometry for fluid inclusion contents, it is necessary to open the inclusions trapped within the mineral host (usually quartz) which releases the volatiles. This must be done within the vacuum of the mass spectrometer, and the volatiles released must then be directed into the ionizer of the mass spectrometer. Two methods of volatile release have been used, either by mechanical crushing or by thermal decrepitation. In either case, the release takes some time, up to some 2.5 hours in the instrument described here, which uses thermal decrepitation at 6° C per minute. The long duration of the analyses is uncommon in conventional mass spectrometry and could allow for unusual atomic and molecular interactions in the ionizer including the generation of H2  from the abundant H which is present. A possible mechanism is proposed here.

Hydrogen is an unlikely constituent in fluid inclusions

The main limitation to trapping hydrogen within fluid inclusions is because hydrogen can easily diffuse through the host minerals and be lost from the inclusions, even on very short time scales, much less the many millions of years of inclusion entrapment for geological samples. It is highly unlikely that substantial hydrogen contents could remain trapped in fluid inclusions. In addition, hydrogen is chemically reactive and could easily react with various minerals. It probably could not even survive unreacted in typical mineralising systems which are full of oxidants!

Can hydrogen be formed by reactions within fluid inclusions?

One reaction that D. Norman suggested was:
CH4 + H2O  >  CO + 3H2
This reaction can continue further to give CO2 and more H2
This reaction sequence is used commercially to generate hydrogen for use in ammonia and fertilizer production. HOWEVER, it requires the use of a Ni catalyst, temperatures of 700° to 1000° C and very high pressures. The reaction is highly endothermic with   ΔH  : +206.1  kJ/mol , and an unfavourable entropy change of  ΔS  :  +222  J/°/mol.  This reaction is consequently unfavourable below 940° K (667° C).

It is considered highly improbable that this reaction is the cause of hydrogen observed during mass spectrometer analyses of even thermally decrepitated fluid inclusions, as thermal decrepitation systems rarely exceed 500° C and there is certainly no catalyst present!

An example of fluid inclusion volatiles analysis by mass spectrometry

This analysis was carried out using thermal decrepitation of a quartz sample known to contain aqueous, CO2 rich fluid inclusions. (The instrument is shown here) 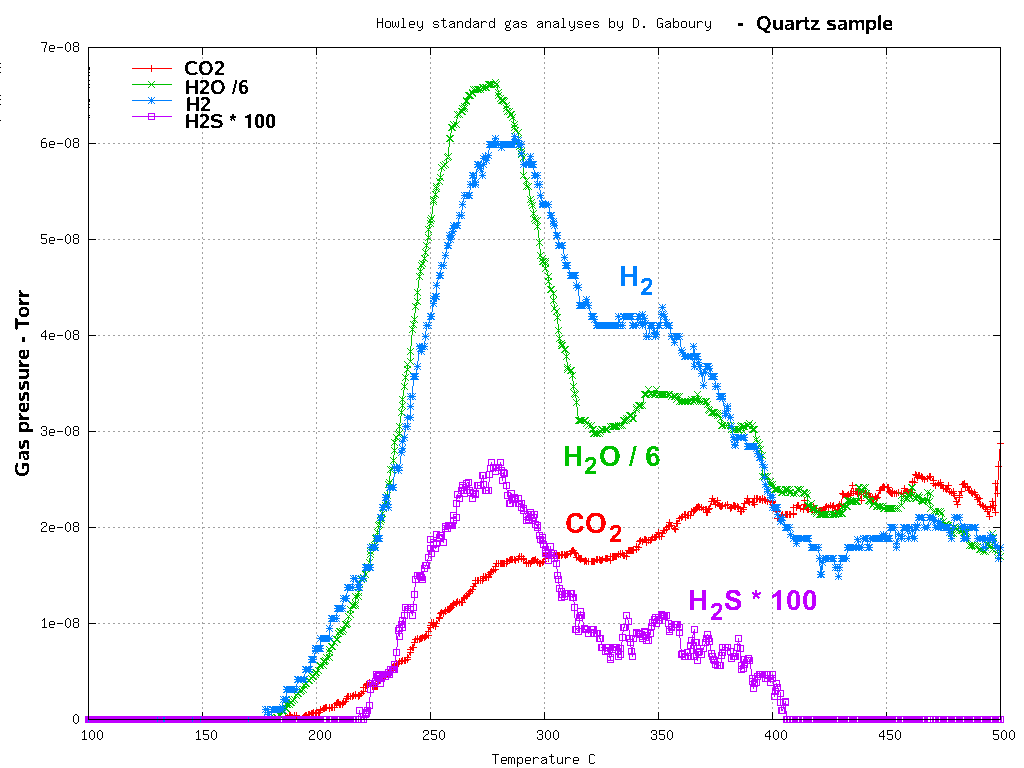 Note the astonishingly high hydrogen analysis (blue graph) which exceeds the CO2 amount! How can this be real for inclusions trapped since the Proterozoic and from which any original hydrogen must surely have diffused out?
Note that the hydrogen release mimics the water release with temperature, but NOT the CO2 release! Why would hydrogen preferably co-exist in the aqueous, liquid phase rich inclusions instead of the gas phase rich (CO2) inclusions? This is surely improbable.

The all too obvious explanation is that the hydrogen is being generated by decomposition of  water within the mass spectrometer ionizer and is not present in the original fluid inclusions and nor is it the result of chemical reactions during analysis.

The unexpected high concentrations of hydrogen in fluid inclusions as measured by mass spectrometer are very suspicious and unlikely to be real. The most probable explanation is that this hydrogen is generated as a byproduct of the ionization of water and other hydrogenous species, particularly hydrocarbons, in the electron impact ionizer of the mass spectrometer. A possible mechanism for this is discussed here.

There seems to be a complete ignorance of this likely problem during ionization, and all mass spectrometer measurements of hydrogen content of fluid inclusion volatiles should be treated as probably erroneous unless there is a thorough discussion and testing of pure water and hydrocarbon behaviour in an identical mass-spectrometer and ionizer for identical analytical durations and temperatures.

But I have seen no such evaluations in the literature and it seems the fluid inclusion community is ignoring this problem.

None of the discussions in the literature even bother to mention the ionizer type or operating voltages!

Hydrogen analyses of fluid inclusion contents should only be analysed by the now more widely available Laser Raman microprobe method instead of by mass spectrometry. In fact, when fluid inclusion contents are analysed by laser raman, hydrogen has only rarely been found, except  in some hydrocarbon rich inclusions (this hydrogen is explained as a laser induced dissociation of the hydrocarbons) or in uranium deposits (in which the hydrogen is explained as radiolytic dissociation of water).

Clearly, hydrogen is rarely present in fluid inclusions and mass spectrometer analyses which claim that hydrogen is present are probably incorrect and should be confirmed by laser raman analysis.


Back to the hydrogen analysis index page